Hi All,
Trip#4 was the day before yesterday to Kohimarama and yelled absolutely nothing :-(
Trip#5 was a scouting trip to one of the remote shore parks where we had a BBQ:
- 1967 2 cent piece
- Maybe a  Silver "Nike" Ring : 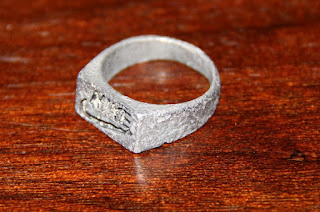 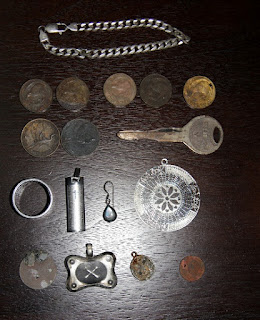 It is called "El Padre Nuestro" in Spanish


But main find for me is the location of 2 "Honey Holes" , however they were about waist deep. I tried them quickly and could hear a lot of targets, but could not really stay there as it was windy and waves were smashing up to my shoulders. I will buy Wet Suit tomorrow and go after all those heavy items :-)

Stay Tuned for the next update!

It was a warm,sunny afternoon at Mission bay.

i arrived 2 hours before low tide and tried to do "washing board" without any success, after 1 hour got only 1$.

The good thing - i met another metal detectorist- Pam, She is a member of Te Tahi Detector Club. We had a little chat and shared couple of stories:-) - she has been detecting over 5 years now.Really lovely Lady.

So with a low tide started the "washing machine" - area were waves brake between settlement area and the shore. within minutes i found 2$ and ...an awesome condition 1936 half Rupee India : 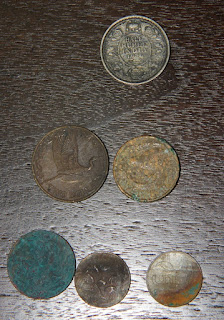 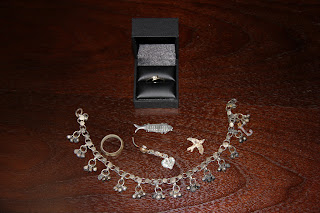 And here i would like to stop for a second and tell you something. I decided to collect all Pull tabs i get between gold rings. and here is  only a fraction of pull tabs collected,probably 10 days 151 pulltabs (all those kilos of other rubbish is usually discarded right at the beach bins ). So if to take into consideration that last gold was over 1 month ago, triple the amount i had to dig to get to the gold ring: 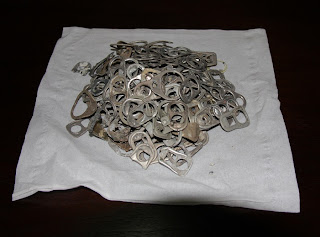 Now i reset the count till next gold ring. This post is for those who sometimes say:"Oh it is not fair someone lost a ring,you need to give it to police/newspaper/radio..." - all that crap. I spent hours trying to find those rings, My equipment has quite a high cost that i need to earn back. And also i clean the areas. So please, if you see that one of the rings belongs to you or someone you know- Be generous with a reward :-) And remember - if you claimed insurance, you are no longer the owner and it is illegal to double dip :-P ....

...After i finished  "washing machine" i started the settlement are and found a Silver Fish, crap Ring, A belly piercing-they usually gold or at least silver, rarely stainless. But this one is crap one (that girl is stupid- Ferrous item should not be inserted) Also a small plated Bird.

And final find for the day- pretty good condition Sun Glasses! ya baby :-) 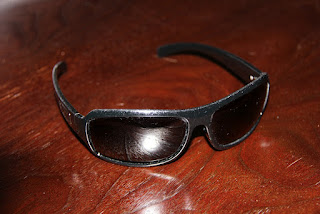 Thanks for stopping by and see you later :-)

Hi all,
today was an absolutely lovely warm day, so i went to the beach and tried to hunt in the water.
I was trying to locate main "Honey hole" or at least the settlement area, but without success.
However still managed to pull 3 keepers:
2$, Junk hear clip and 2$ 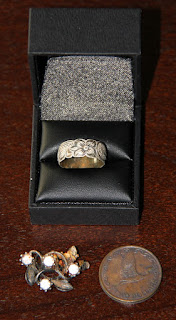 Tomorrow will be going to my triple beach :-)
Posted by Max at 18:22 No comments:

I couldn't wait any longer....
So Andrew and i went at a high tide to Devonport beach so i can test the Excalibur while he went over dry sand.
It took me about 20-30 minutes to get used to the machine. then the fun begun. spent about another hour there going up/down the "washing board" - that is what we call wet sand slope down to low tide mark.

Got Silver earring and some coins.
Then close to low tide - about 11 pm we went to Takapuna to try bottom of the "washing board" and ankle deep water :

Got a Silver ring : 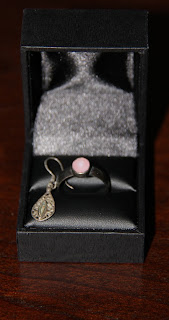 So far not bad for a first time with Excalibur. 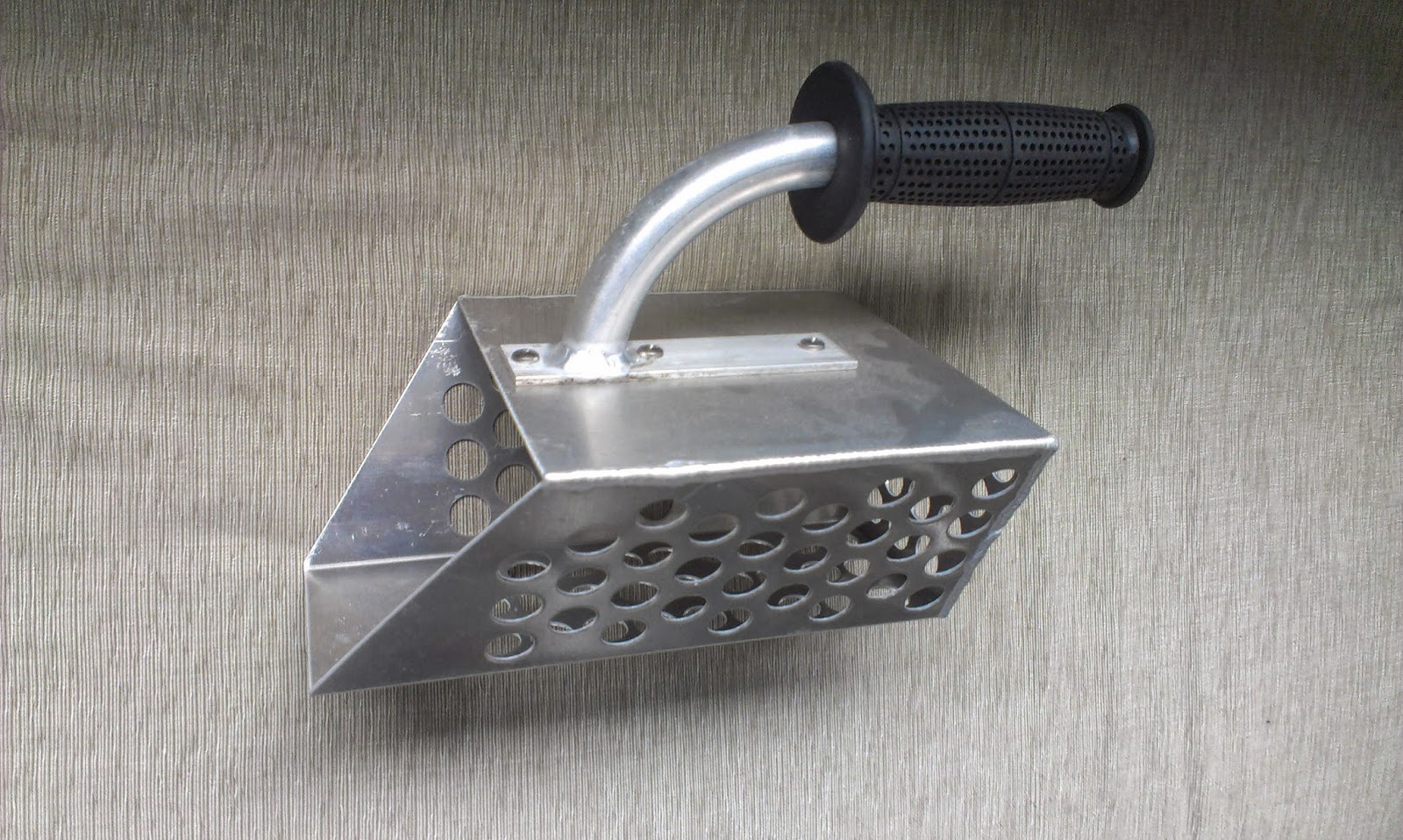 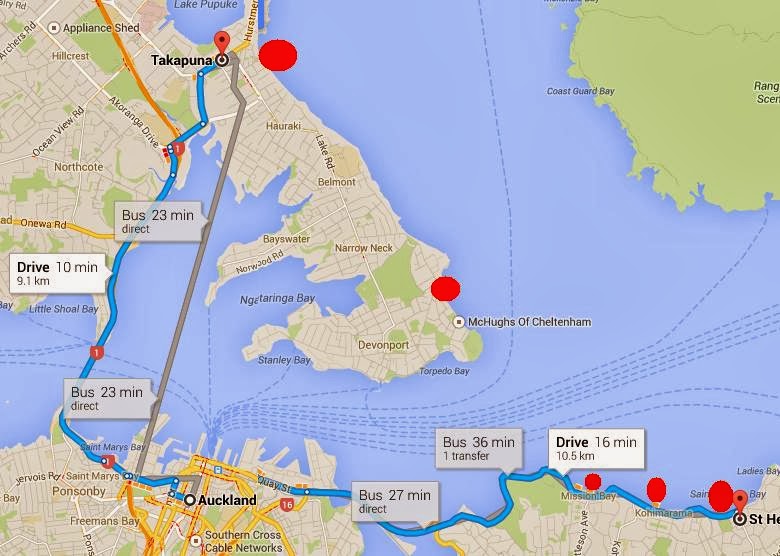 I was waiting for it for almost 2 weeks to arrive...
And finally it is here, the best underwater detector voted by users around the world:
Minelab Excalibur 1000 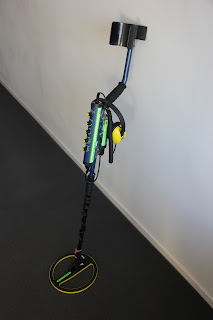 I have 2 leads for lost rings at the beaches that were lost below low tide mark....
...So as soon as my sand scoop arrives- i will be on the quest for recovery of wedding rings :-)

Tomorrow Andrew and i will conduct test between His Garrett Infium and my Excalibur on target depth in a wet sand.

Stay tuned for all upcoming updates :-)

Quick Update- Got my Sand Scoop today as well! : 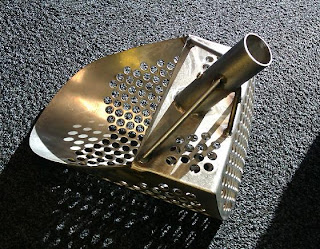 I want to try Bamboo handle first, if fail in strength will do Wood/Metal


We really enjoyed the weather. not many finds, but all good....
See you at the beach
Posted by Max at 12:02 2 comments:

You probably had a thought in your head- that it is simply Silver + Nickel . Wrong!


Me and Andrew we digging an old stream during low tide during Easter weekend.
Andrew Got lucky with 6pence and a gold Ring, where all of my 2 shillings and a florin were just couple of years away from Silver Mint. 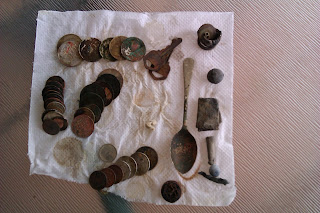 The story is about this spoon anyway :

It has a hallmark :
Nickel silver Birmingham England

So I thought I got at least Silver plated spoon, but after look up I found that :

Nickel silver, also known as German silver,[1] Argentann,[1] new silver,[1] nickel brass,[2] albata,[3], or alpacca,[4] is a copper alloy with nickel and often zinc. The usual formulation is 60% copper, 20% nickel and 20% zinc.[5] Nickel silver is named for its silvery appearance, but it contains no elemental silver unless plated

So check your Silverware at home, you might have some of that Nickel silver L

Have a good day . 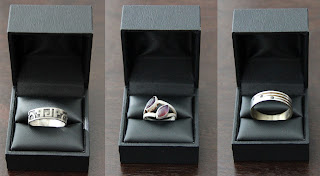 Joking :-) but we still do not have an answer what had happen that night
Posted by Max at 10:33 5 comments:

I have a story to share,
I was metal detecting yesterday at Mission bay/Kohimarama, closing my beach season (5 hours and found only 4$ and scrap metal pendant).
About lunch time a young fellow approached me and told me that he has lost a rose gold&platinum
wedding ring about 2 month ago at St. Helliers. He also thought that it might has been stolen as he left it on the towel . I asked him if he claimed insurance on it and he didn’t and also it has great sentimental value for him- the Rose gold part is from same chunk that was used to make his Wife’s wedding ring. He also advised that he set a 500$ reward for the ring
I gave him my phone number and email address and asked to email me the Picture of the ring.

So last night I got an email from guy with attached poster: 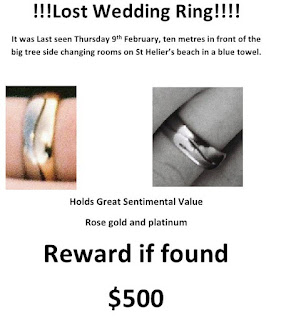 Now, do you remember THIS post?
Here is a close up of the ring : 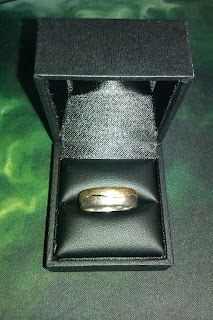 It was buried for 9 days. (see time stamp on my post Friday 17 Feb 2012)
it was found on the High tide mark in sea weed, He indeed lost it on dry sand .If it was just 2 meters closer to water- it would be sucked into the sea by high tide and dragged with tide in unknown direction or buried underneath meter(s) of sand

So today I have met the guy and reunited with the ring after 2 month separation.
Here is a pic of us: 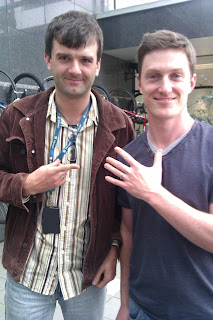 And now I am half way through saving money for Minelab Excalibur 2  that I will use to recover more rings and stuff in water :-)