06/06 outing with Dale helping me with my stress.

Good day,
i supposed to post this several days ago, but was not in the mood of writing the story.
Some of you know what i am going through now, so will understand that being in focus is almost impossible.

Anyway, after crying at my desk at work on Wednesday and being sent home by boss (Thank you Shane) because of my mental meltdown i called  in on Thursday morning that i would not come to work. I simply could not focus on anything, the settled areas of my life are falling apart and it is a VERY VERY hard time for me.

But thank you everyone who support me personally if not you - i do not know where i would be right now.

So later in the morning i got a call from Dale inviting to go for a detect as weather was absolutely perfect. So wiping my tears from the pillow i got ready and around 11 am we went to our first place - the Kohimarama beach... I would tell upfront being there was a huge challenge for me as it is the place where i got married just last year to the love of my life... 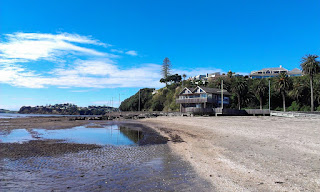 We met other detectorists there : Rix with a big spade..(fix your scoop or get stavr one as all of us did) , Treasureseeker wading in the water and his partner.

We stayed only for about 30 minutes as beach is off season and not much left on it, however i managed couple of $$ and 8 gram silver cross.

We left to have lunch(Dales's shout- Thank you very very much) at St.Helliers Indian cafe and were on they way to burned down mansion. 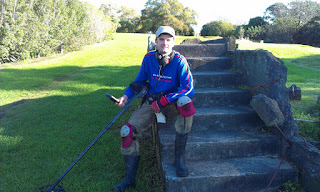 We couldn't really detect there as too much topsoil was put over the ruins.. i bet there are heapsof cool items underneath, but we couldn't get to them.
Dale was a bit dissapointed as he really wanted to find something cool that day, so i took him to the old park and the spot where i knew numerous coins are buried under 8 inches down.

The Third target for me was 1934 Shilling, so Dale was all in arms to find his silver.... after about couple of hours we had a pile of pennies and brown buggers...My other cool find was my 3d traders token :
Edward Waters Penny Traders Token : 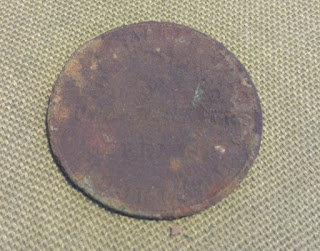 That how it looks like in a better condition :

It was getting dark and Dale still was chasing his silver and was adamant that he is not going home without one....
... So he did with one! and the best one : 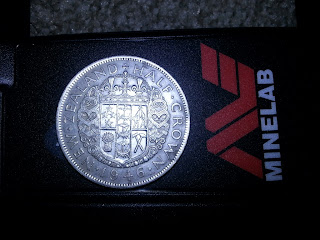 But there was another coin that i found... that was standing out only when i was washing the lot, is the Victorian Cumberland Jack 'To Hanover' Token :

Read HERE about the token

And the all of best finds together : 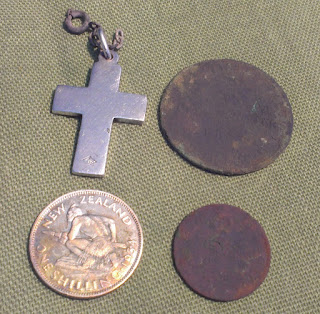 But what i really want to say is thank you everyone for  helping me to get through tough time.